This was our local event to support the Global Climate Strike Campaign which was intended to demand that world representatives deal with the climate crisis and other issues that plague our communities. This was youth-led with others as allies in anticipation of the Global Climate symposium at the United Nations on this past Monday, September 23rd. Mike Waldon estimated that we had about 100 attendees which is a great turnout for this type of event in mostly conservative Lafayette.

Our M.Cs were Jackie Phelps and Scott Ferguson.

Philip Frey played and sang some social justice sing-alongs with us.

We had students from Louisiana Tech and ULL comment and show their support of the campaign as well.

Special thanks to Philip, Kiera and Chaz Fry for bringing a pop-up canopy and extra chairs and helping with the setup and takedown. Thanks to Jackie Phelps for the Invocation.
--- Scott Ferguson

Photos from the event (courtesy of Jackie Phelps) 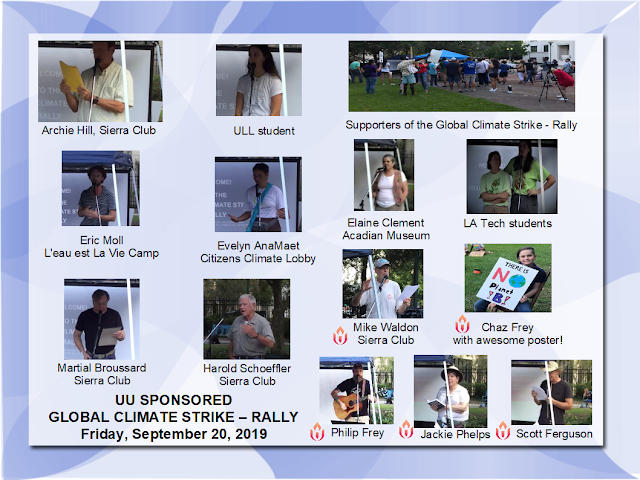 
UULALA will be hosting the 'Clobal Climate Strike - Rally' in support of the student-led national campaign to deal with the climate crisis and other issues.

Our own Mike Waldon will be speaking on the future of severe storms and flooding. A representative of the local Sierra Club and others will speak as well.

I want to Sign On (give my endorsement to) this campaign!

-- Thanks to Jackie and the Social Concerns Committee for organizing this! Please attend to show your support! Thanks! 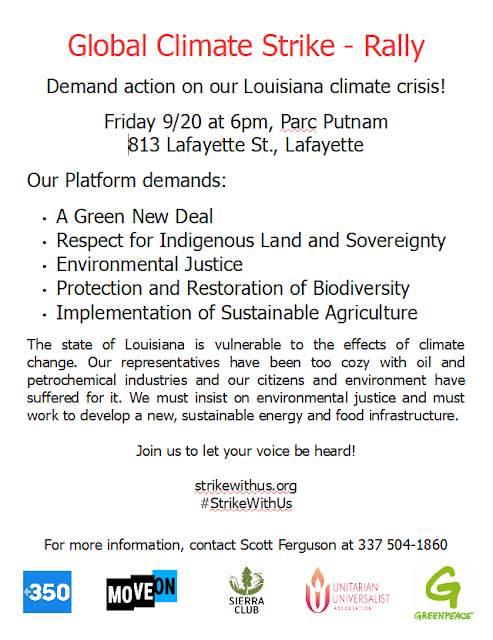